Skip to main content
Yesterday we started on a 12 day adventure. From Niagara Falls, Ont to Albany, mostly along the Erie Canal Tow path all by bike. A little more ambitious than our four day excursion outside of Pittsburgh last year.

Bright and early we set out -- at Penn Station by 6:00am. That's where we had our first scare -- the Amtrak agent said we couldn't bring out bikes. Amtrak policy say's otherwise (folding bikes that fold to within a certain size are allowed at any time according to their on line regulations. We also checked by calling). The agent checked and we were allowed to board. 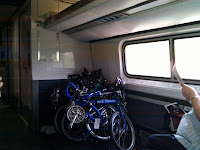 ]
After a long day on the train including about an hour waiting for customs, we got off at Niagara Falls, Ontario. After checking in to the hotel, we went down to the falls. Had dinner at an OK middle eastern place -- good Schwarma, so-so falafel. 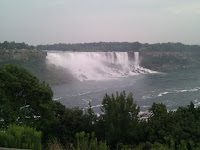 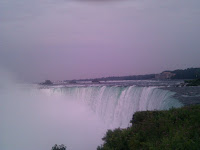 We then walked back to the hotel for the night.
Total milage: 1 (.5 from home to Penn Station and .5 from The Niagara Falls station to the hotel).