Skip to main content
Day 3. From Lockport to Brockport.

Lockport is "famous" for it's locks -- the two channel 5 step ones. Brockport is famous for it's... brocks?

After a reasonable nights sleep and breakfast at Hambleton House, our BnB, we were off. 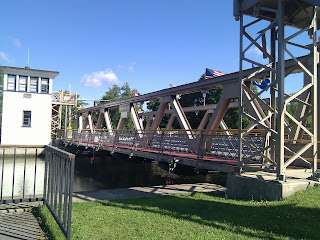 Here's one of the many lift bridges that cross the canal. Right now it's down. It's raised when a boat has to pass under. Back in the day, as there was much less road traffic, the bridges stayed in the raised position so boats and barges could pass. Stairways took pedestrians to the raised pathway to cross at any time. The bridge only had to be lowered when vehicular traffic had to cross.

The entire day was spent right along the canal providing for some very pleasant scenery: 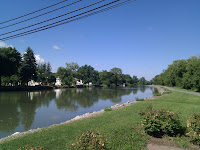 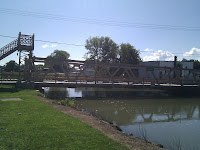 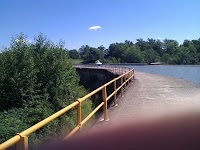 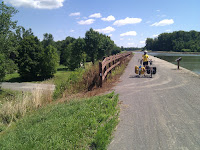 And here, this aqueduct is the only point at which a road passes under the canal.

And then to the northern most point of the canal: 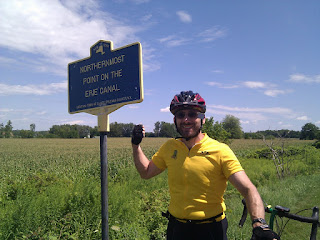 About 22 or so miles in, we stopped at Albion for lunch. After riding around the historic downtown and seeing the cobblestone buildings, we stopped at a coffee shop  for lunch, picking up one of their famous SchnickleFritz cookies for a snack later on. 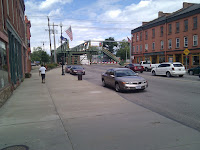 Here's another lift bridge -- in the up position this time. 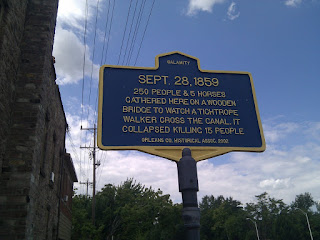 This lift bridge was the sight of a circus stunt gone terribly awry.

Making it to Holley NY, we realized that we've actually covered a fair amount of ground: 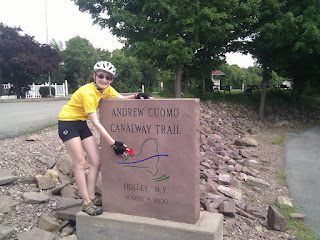 This was at a park that had a really nice waterfall, but alas, I don't have a shot worthy of sharing.

From there five more miles to Brockport, the Victorian Inn, showers and dinner at a Greek restaurant.

This beats both our touring one day total of 42 from McKeesport PA to Connelsville, PA and two day touring total: Mkeesport PA to Ohiopyle PA, 58 miles. It doesn't beat our top day which was 88 miles -- the NY Century (75 mile ride plus an extra 13 afterwards).