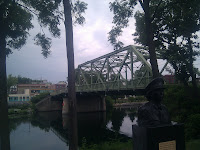 Angel 1: What are the Zamansky's doing next to that bridge?


Angel 2: Maybe they're pondering if their lives have had any meaning in this world. 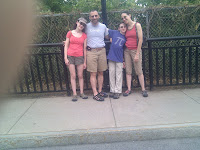 Angel 1: Do you think we should send Clarence to straighten them out? He seemed to do a good job
the last time we had a troubled person on that bridge. He even earned his wings.

Angel 2: I don't know, maybe they're just trying to decide on where to go to dinner.


Yep there we were, on the bridge in Bedford, I mean Seneca Falls. The bridge and town that was purportedly used as a model for Frank Capra's "It's a Wonderful Life." But how did we get there? Maybe we should start at the beginning.

We left our intrepid adventurers last night in Palmyra. After posting, we went to look at the Joseph Smith farm and Sacred Grove, passing the Mormon Temple and Church along the way. This morning after breakfast with what appeared to be a number of "pilgrims" getting ready to worship, we set off. 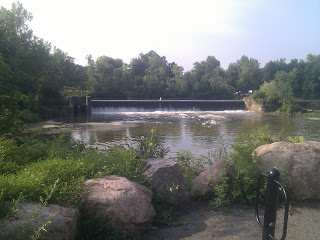 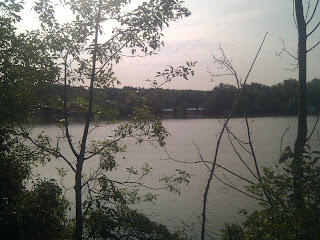 Passing through all the "port" towns, each with the canal neatly manicured. Straight banks and a narrow channel it's easy to forget that the whole project tied together a number of NY waterways. At points like in the above picture, it's much wider and the banks much more natural.

We stopped at a hotel in Newark NY for the facilities. Natan noticed this: 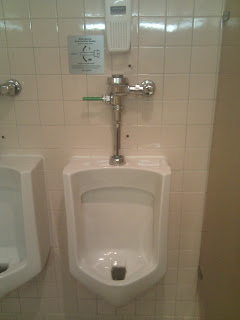 The sign instructs to flush up for liquid waste, down for solid. We decided not to ask. Tim, I don't know if you read this blog, but I think you had a story about this.


From there we moved from the canal path to the road. After a few miles on Bike Route 5, we ended up in Clyde. Ate at  "Brickoven" a restaurant that used to be an industrial bakery. 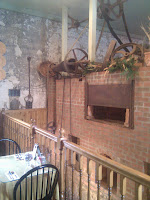 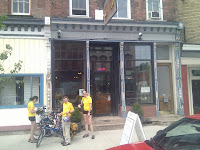 Perfect stop for lunch. The corned beef hash I had wasn't great -- tasted like canned. Maybe that's just coming off of the hash I had at the diner in Tonowanda which was truly exceptional. Everything else was terrific and the staff and clientèle as friendly as could be.

From there it was on route 414 until we got to Seneca Falls. We did some road riding on our first day, but this was our most extensive. We had some stretches of six foot shoulders, but some of three and some of none. Since the roads weren't that busy it wasn't too nerve wracking.

Interesting though, to see how motorists treat you. Most motorists made attempts to slow down and shift at least partly into the neighboring lane (where oncoming traffic sometimes made this impossible). Every now and then, however, a car would blow by right next to us.

I particularly noticed a three car caravan that whooshed passed us. The first and third cars were no surprise -- a big honkin SUV and a red sports car. The car in the middle was an ice cream truck -- you know the kind. The small ones that park on a street corner to dispense Good Humor Bars. Complete with those big SLOW
emblems on it. In all fairness to the SUV's most of them gave us wide berth.

Forty two miles after we started, we ended up in Seneca Falls. It's noted for a number of things including the women's rights movement. There are a number of plaques noting important achievements of women including Amelia Bloomer, Elizbeth Cady Stanton, and others.

We walked part of the town, passing the church where the first equal rights amendment was proposed: 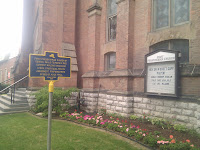 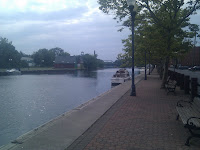 And a neat sculpture garden: 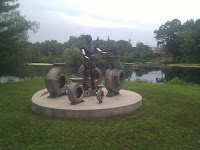 After dinner, we walked back to our inn. So tired from the day, only 42 miles, but with a fair number of hills that we got a laugh out of this sign: 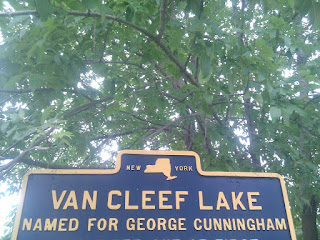 Only to realize that it was just poor typesetting: 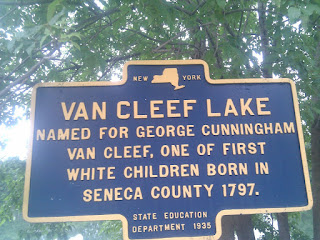 Now back at the inn for a good night's sleep.