Skip to main content
Now for the rest of the trip.

We had some trouble getting out of Rome. As always, once we're on trail, it's pretty easy to follow, but entering and leaving towns and cities, with the exceptions of canal side towns like Lockport, can be a challenge. During the day, we found that we could either follow the official Erie Canal Trail signs or the pink trail blazes painted on the streets for the Erie Canal Tour (that preceded us by a week). As we get to towns, the blazes are of little use since they lead to rest stops and camp sites rather than through. We also had the Cycling the Erie Canal book. It's terrific and I recommend it to anyone riding the canal. It does, however, have one problem. When the path is on the road, it doesn't actually name the road (rather, it superimposes the path line). This made getting out of Rome a chore. Fortunately, we only added one mile to our day before we found our way out. 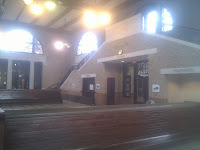 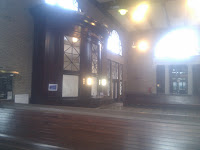 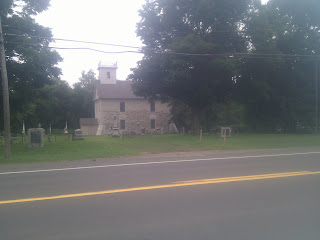 The rest of the ride was relatively uneventful.

We spent the night in Little Falls. Stayed in the "Canal Side Inn," a small in with three rooms. Our's was both huge and gorgeous.  It has a connected restaurant. Fine French/American fare. Everything on the menu looked delicious, but after a day of riding, it was a little much. They also had a less expensive, less elaborate grill menu with items like Steak Frites, or scrod in an almond crust served in the lounge. As the lounge was booked, they offered us the grill menu in the main dining room. Food was excellent, including the deserts -- chocolat pot de creme, a meringue filled with strawberries and ice cream, and a blueberry bread pudding.

If you ever get to Little Falls, eat at the Canal Side Inn.

Then it was time to turn in.

As Little Falls was right next to the canal, leaving town was easy. Just outside of town, we passed the high point of the canal. At the point, a lock with what I think was the canal's largest altitude change.

It looked to be another uneventful day. More beautiful views that have become de rigueur and more crushed stone path that was more like biking through sand.

It looked like our two most promising lunch spots were at around 15 miles (too early) and 30 miles (too late). At 15 miles, at Canajoharie, we stopped for ice cream: 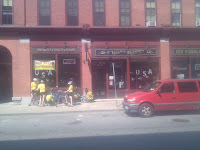 This was the first time all trip we were able to find mid-day ice cream!!!!!!

Canajoharie is another one of those small towns we passed through, but they set up a little information stand right where the trail crosses main street. The young man working there directed us to the ice cream.

One of the things that surprised me throughout was the lack of signage at the towns, particularly the small ones. While the traffic on the trail isn't great, a couple of signs pointing to food and refreshments at the trail heads would cost next to nothing and maybe draw a few more people into the towns.

Refreshed and refueled, we continued on. After lunch at Fultonville, we soldiered on. A few miles out of Amsterdam, we got to the Schoharie crossing: 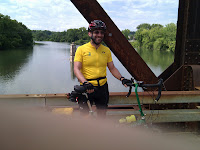 Here, you can see the remains Schoharie aqueduct from the barge canal in the distance: 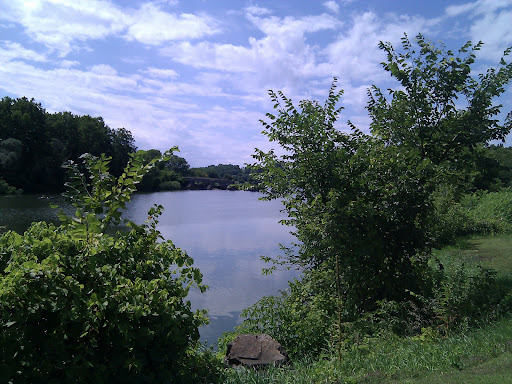 The Schoharie crossing is the one location where there are remnants from all renditions of the canal and one can also see the I90, where the bridge collapsed some 20 years ago.

It also turns out that this was the site of other historic places: 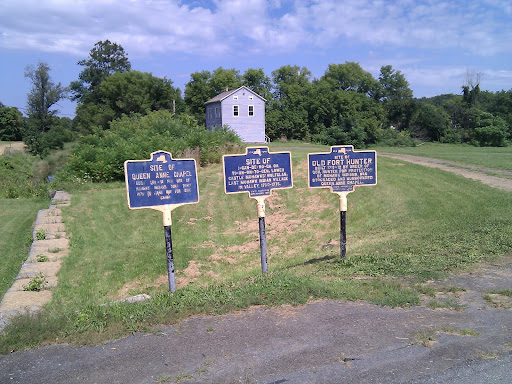 We arrived in Amsterdam a short time later. We stayed at the America's Best Value hotel. The only one in town. Looks like new ownership is doing some serious renovations but the rooms were spacious, clean, and nice. BIL Mike and SO Maria live nearby and joined us for dinned. We ate at the on site indian restaurant -- naan and saag paneer -- mmmmm.

One more day of riding.

Last day of riding. We estimated about 50 miles. Best lunch possibility was Cohoe s, about 30 miles away. We were hoping to find a snack along the way but figured we'd make it on Nuun and Cliff Bars if needs be. The mileage looked to be formidable, but we also new the whole day would be on paved roads and paved trail. 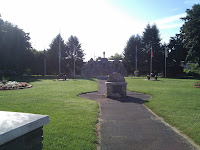 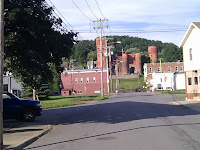 Sad to say, even here, there are ghost bikes: 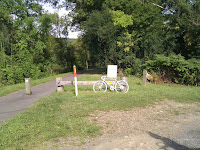 Some final pretty views along the way: 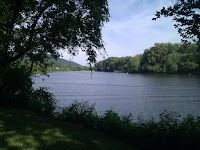 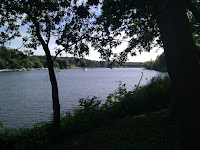 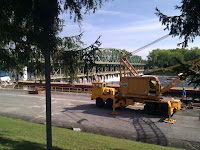 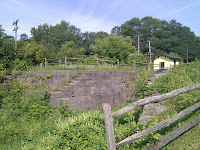 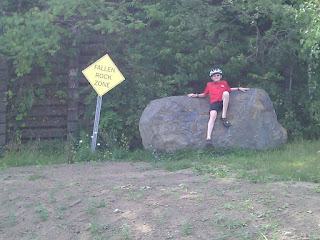 This bridge that just rose out of nowhere: 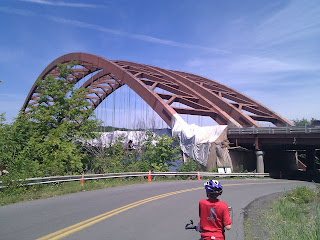 And a family picture sans me: 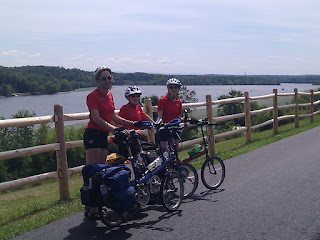 And we were at the Cohoes falls: 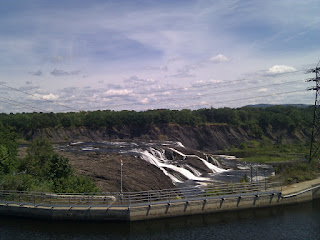 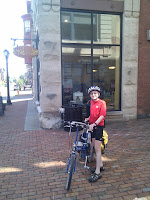 We stumbled upon a bike shop that recommended we go to "Bread and Jam" for lunch.


After lunch, we were down to our last 10 miles.

Along the way we saw this: 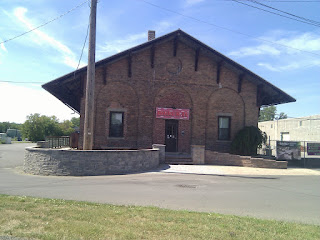 Clearly owned by the third pig.

Finally, to the Hudson river, our river: 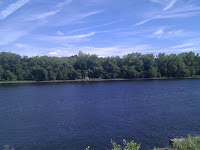 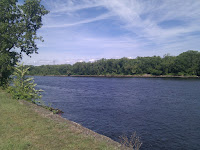 We got to Albany early enough that we were able to switch our train tickets, cancel our hotel reservation and get home by 7:00.

We're all a little tired but feeling a sense of pride.

Next, some reflections on the tour and touring.