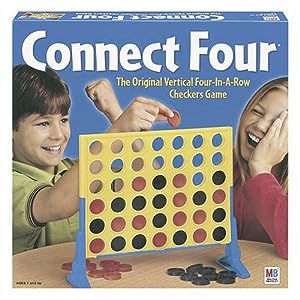 I've always lamented the fact that we don't have the time or structure to really teach our kids to program.

In their early classes, they learn syntax, algorithms, and  some ways of storing data and while they  will probably work on some larger projects as they study CS, kids seem to be mostly left on their own in terms of how to take a project from problem or idea to completion.

This frequently leads to poorly designed projects that are harder for the kids to write, debug, and modify. They end up with huge functions/methods no overall plan or design and everything's pretty much a mess

To try to address this, and having finished  most of the A.P. curriculum and not wanting to diverge from the other teachers, I figured we'd develop a class project before I gave the class time for their final projects.

I'm not a huge game person, but since they decompose well, we decided on writing connect 4 - a game that can be described as tic-tac-toe but with four in a row, on a larger board, and WITH GRAVITY!!!!!!

Actually, the choice of project didn't matter that much so long as it was the right size -- this was more about how we develop a program than about the actual program itself.

After a while, we started to share thoughts as a group. Most suggestions revolved around details -- how to you check for a winner, how do you make a move. This made sense - we've spent much of the term dealing with writing code fragments to do things and not too much time thinking about overall design.

This lead to a healthy discussion of looking at things from the top down as well as bottom up.

By the end of the class, we had identified the key classes we'd need (Board, Player, UI, Game Driver) and had some idea as to how they would relate to each other. By the next morning, we added a data structure for the board.

Over the next few days we filled in the missing pieces. We moved up and down levels of abstraction being careful to discuss why we designed things the way we did and adapting pieces as needed.

By the end of the project we were able to accomplish the following:
Based on preliminary feedback, I think the students have a much better ideas as to how to break down, design, and build up a project from design to implementation.

If any one's interested, the code is available here.

We'll see if it helps with the final projects, but I'm optimistic.  Spending time highlighting the design and development process while building a project can only help.

Anyone else have interesting mid-size projects they do with their classes?