Shortly after our event at Foursquare, I was chatting with Kevin Friedman (Stuy '96). Kevin's startup is Cojourneo and since it has an educational bent, he thought I might be interested in hearing about it.

Rather than visiting Kevin, I thought it would be fun to have him come down after school, present Cojourneo to any students that wanted to stay late and then field questions. 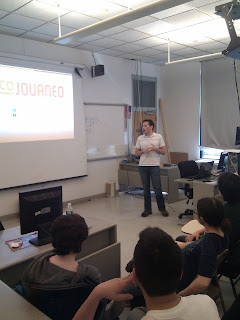 Cojourneo is an interesting product. There's been a lot of hype around on line education in the past year, but it seems to me that Cojourneo's a little different. We've got efforts like Coursera and Udacity that are trying to bring university style offerings to the masses while places like Codecademy seem to be more vocational in nature. All three efforts are "class" based. That is, you are taking a class over a period of time. Despite some resources to make these classes shared experiences -- specifically things like discussion groups, they mostly seem to have students watching videos or working through on line material on their own.
Cojourneo's approach is to organize around "journeys" which aren't necessarily academic in nature, one of the journeys they have going now is Surviving the Startup Journey, but Kevin mentioned that they could have things like book clubs, travel journeys or any number of other types of journeys. They're also different in that they're really trying to create a shared experience -- you take the journey with a small circle of people, not solo - I love this aspect.
By no means am I an expert, but I like a lot of their ideas.
A bunch of students gathered and we were off. I had no idea how the talk would go but I figured that the kids hadn't had an opportunity to speak one on one with someone in the early stages of a startup so it would probably be valuable.
Kevin presented the product, talked about some difficulties and decisions along the way and generally tried to give the kids the flavor of what it was like to start a product and a company. The kids tried to reciprocate by providing feedback on the product.
Most of the questions focused on the business side rather than the technical. Kevin was asked about funding, monetization, building a user base, scaling, and any number of other ideas.
All in all, I think it was a valuable experience and look forward to bringing more alums down to talk to the current crop.