Skip to main content
Here's what the bridge leading across the West Side Highway over to Stuy during the storm. Hence the title with the weak tech reference. 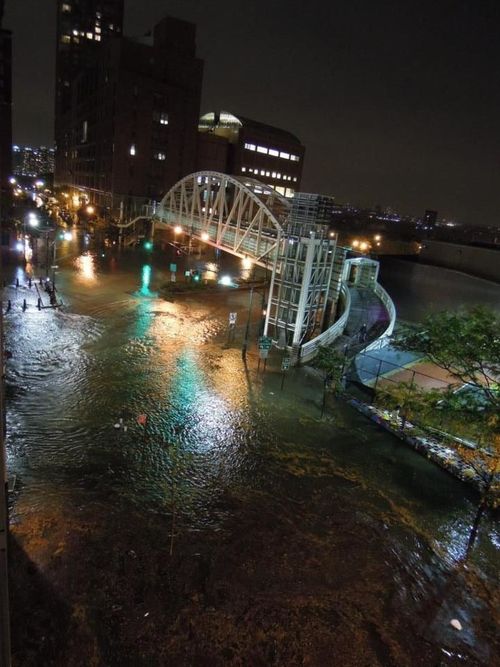 The storm has kept the schools closed all week so it's as good a time as any to try to resurrect this blog.

As you can see, I've moved from blogger to a Jekyll based blog hosted on Github. I'm really liking the way it works but more on that at a later date.

Some time Monday evening or Tuesday morning, I asked Batya if she thought my seniors would be up for a livestreamed class (Batya, my daughter, for anyone who doesn't know, is in one of the sections of the class). It turned out they were all in.

I've got to say that I've got amazing classes -- the fact that they're into the same brand of insanity as I am and even willing to go again tomorrow isawesome.

So, here was today's experiment:

A Google+ hangout based live stream of Stuyvesant's Software Development class. In my favor was the fact that I was just going to introduce CSS - not a subject that lends itself to deep classroom discussion. Against me was the use of technologies I haven't used before and the fact that we have about 64 students that I was hoping to reach.

First, let's talk about the technical side. 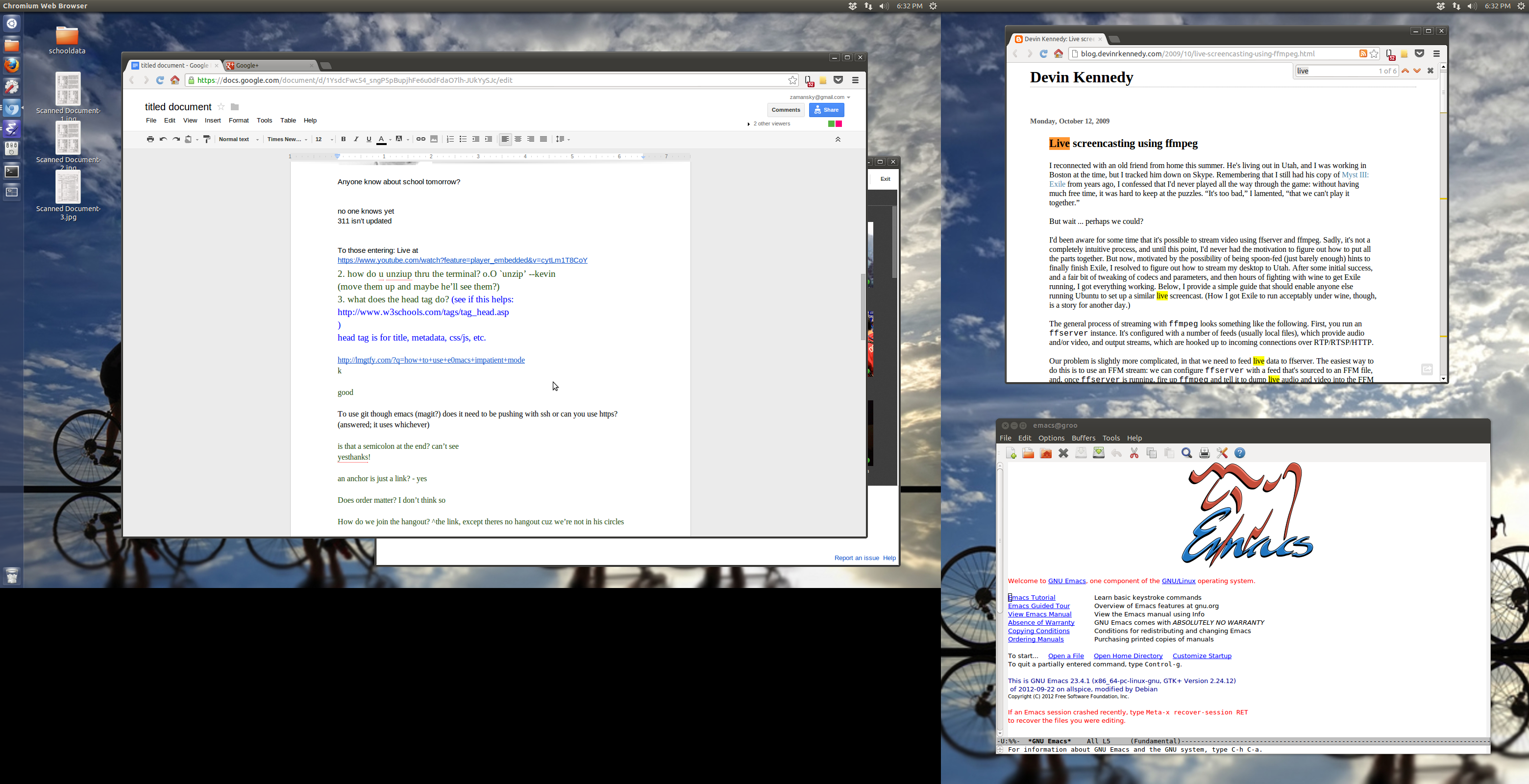 I've got two monitors and Google would only broadcast the screenshot from the smaller one on the right. It had Emacs and a chrome going most of the time with an occasional shell. While teaching about CSS, I also introduced the students to Magit as well as Emacs impatient mode both of which are awesome. On the left hand screen I had the actual Hangout as well as the Google shared doc.

It turns out that you can't make a public Hangout and also stream it live on YouTube, you can only invite people in your circles. Since most of my students aren't in my circles, only a few could "join" the Hangout. Most watched the YouTube stream and we all connected to a shared Google Doc for notes and questions.

The Google Doc turned out not to be the best idea. It got everyone writing in the same document but people ended up writing all over the document. If something wasn't on the screen I wouldn't see it. We're going to try something more sequential tomorrow -- maybe disqus comments.

The other two problems were the low resolution of the screenshot broadcast and the lag. I really had to blow up the font size. If anyone has any ideas how to do this well, please share. The lag was also a problem since it kept me from having anything resembling a reasonable feedback loop.

On the other hand, my students were left with this enduring image of me: 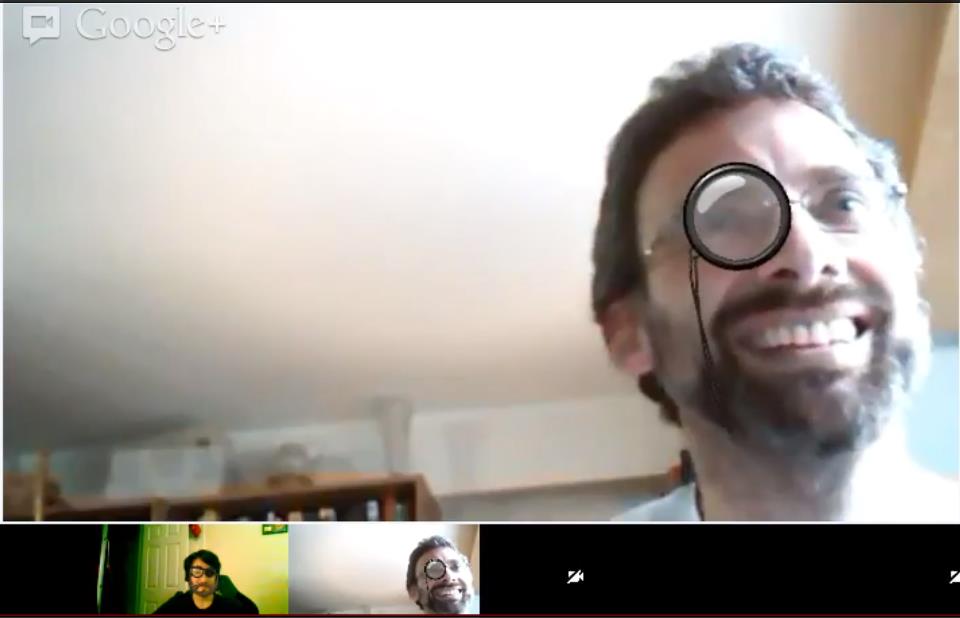 And the view from a teacher

On the one hand, it was pretty cool to be at home and able to work with my students but there were some major deficiencies:

Can't see the audience
Even at best, with the Hangout you can only see 10 people. I'm guessing it feels like a stage actor doing a movie. I was talking but couldn't see my audience. No nodding heads, no nodding off heads, just talking to a screen. It was a little disconcerting. Teachers adjust to their class all the time both consciously and subconsciously. You might do something overt like call on a particular student or maybe sense it's time for a joke or even little things like how or where you stand. All of this was lost.
Need a better chatroom
I mentioned that the Google Doc wasn't a great idea. I think something that's more vertical like a chatroom will work better. I'll know tomorrow.
An shared board space would be very cool
The other missing piece is a way for the students to directly interact with what I'm presenting. A shared Emacs would be amazing.
The delay is a killer
This was also a problem. I found myself saying or doing something then waiting until something came through the document. This hurt the flow considerably
I really found the experience enlightening. People keep talking about recorded lectures and MOOCS and all that but if anything, today's experience just confirms to me that there's nothing like an in class teacher, particularly with a small group of students. That said, I think this was a good experience and my students seem to agree. We spent part of an otherwise unproductive day in a productive manner and we're planning on doing it again tomorrow.

Since Students will be home until Monday, I'd like to go for a third class on Friday but I'll be back at work so it looks like no class after tomorrow until Monday.