We've been using NetLogo in our intro course for years. It's a wonderful programming environment. Many of you recall the Logo programming language. NetLogo is like Logo but instead of programming a turtle, you write a program that's run by multiple, perhaps hundreds of turtles and also by the world the turtles live on.

Some of the reasons we like it are that it's:

And now, with the latest version, NetLogo programs/models can be deployed as web sites. All you have to do is save your program as "NetLogo Web" and put it up on a observer somewhere.

If you haven't you should download and install NetLogo, run it, then go to the file menu and look at the built in models.

I also enjoy playing with Cellular Automata and NetLogo's a wonderful platform to play with. The turtles live on a grid of patches and just like the turtles, the patches will all run your program over and over.

The patches make perfect cells for a cellular automaton and you can implement a rule set in your patches.

NetLogo even comes with a bunch of built in demo models for Cellular Automata including Conway's Game of Life, probably the most famous CA.

On the other hand, Conway's Game of Life is somewhat cliche and while I find it fascinating, it doesn't really solve a practical problem, at least on on the surface.

So, I was looking for something more practical to do and something where we could explore some deeper CS concepts.

In class, we make a Cellular Automaton where each cell or patch is a pixel in an image. In NetLogo, you can do this with the "import-pcolors" command. Lower down, I have a demo that just manually colors patches - the web version of NetLogo doesn't yet support that command.

Task 1 - what if we want to shift the image over? The kids come up with a solution pretty quickly: "We can just have each patch ask its neighbor for its color." Here's the code they try:

To see what happens, scroll down to the NetLogo model below, click on setup and then hit the shift-naive button a few times.

It's a synchronization issue.

Suppose we have the following three cells in a row: 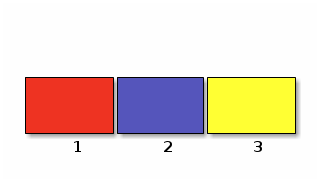 If cell 3 asks cell 2 it's color before cell 2 asks cell 1's color, we get the desired result: 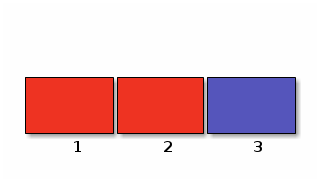 But if cell 2 asks cell 1 for it's color first then cell 3 will actually get cell 1's color: 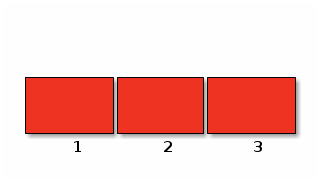 So now we have the students thinking about synchronization and parallel processing and they don't even know it.

The solution's pretty easy, break the problem up into two steps.

First, have every patch ask its neighbor for its color and then once everyone knows their neighbor's color, then change:

You can run that by clicking setup again and then shift-correct a few times.

There's some of the beauty of NetLogo - we can get kids to think about some deep concepts while playing with an easy to use, fun, interactive environment with a real textual programming language.

Stay tuned for part 2 when I'll talk about creating a cellular automaton that can solve a maze.