In the New York City department of education a recurring hot topic is the Absent Teacher Reserve or ATR pool.

A teacher or administrator in the ATR pool is a licensed, most likely tenured teacher not assigned permanently to a school. Each year these educators get shuttled from school to school and denied a chance to actually settle in a position.

The ATR pool was created under the Bloomberg administration. Prior to that, when there was an opening school transfers were basically seniority based and when school had too many teachers the least senior was excessed or basically out of a job until a school with an opening could be found. The Bloomberg plan allowed teachers to use criteria other than seniority for transfers but so as not to violate the contract agreed to by both parties, teachers who were excessed, as they might not be least senior, were kept on as employees and put in the pool.

ATR's would rotate from school to school. Sometimes for a couple of week but more recently for a year at a time. When at a school for only a couple of weeks they could only be used as subs or for grunt work but even when there for a year they're treated like second class citizens.

The ATR pool grew in size when the Bloomberg/Klein DOE went on the war path, set schools up to fail and closed them left and right. If you had the bad luck being at a close out school when it closed then, hello ATR pool.

Over the years, the press, ed reformers and politicians have unfairly bashed this group of educators. They've falsely claimed that these are criminal teachers or unsatisfactory teachers. That's a blatant lie. Teachers up on charges are removed from schools and await a hearing in another draconian process set up to violate teacher's rights. If a teacher is ultimately found guilty, they are disciplined or fired. If exonerated, they're returned to their schools. In any case they're not ATRs. Teachers that are repeatedly found to be unsatisfactory are likewise removed (although the process here is ridiculous and unfair as well).

ATRs like any pool of teachers run the gamut. Some are great, some are poor, many will fall in between. All are stigmatized and treated like damaged goods.

People ask, how can a good teacher get into the ATR pool? As I said, be at a closeout school. In the year before I was able to bring my friend and former colleague JonAlf over to Stuy, he was at Brandeis High School - a closeout school. I tried to bring him over that year but his principal wouldn't release him. Had I not been successful in bringing him over the following year he might very well have ended up in the ATR pool and he's one of the best teachers I know. What about the teacher that doesn't want to abandon those kids that the DOE abandoned when they decided to close the school. That martyr teacher surely ends up in the ATR pool but that's the type of dedicated teacher every principal should want.

So now we have a bunch of stigmatized teachers looking for work in a system that won't give them a chance. Not only due to them being considered "damaged goods" but also because they're expensive to hire.

When a school gets an ATR to them, it's free - the cost isn't added to their budget - they keep them as extra manpower for the year and then throw them out with the trash. At times, they get some credit for keeping them a second year and even beyond they can get rid of them whenever they want. Great way to bust the contract.

A clear example of this is Stuy's current math chair. He's an ATR Assistant Principal. They got him for free for the first year and I believe at a 50% discount for the second and even now they can dump him whenever they want. This is rubbish – he's either good enough for the position or he's not. If he is, he should be given the job for real and if he isn't then what is he still doing there. I'm not making any value judgment on him or the department but it's either one or the other.

So, a big reason for this ATR mess is about budgets and money. The problem is that it's a big lie.

The DOE pretends the we have a situation like this: 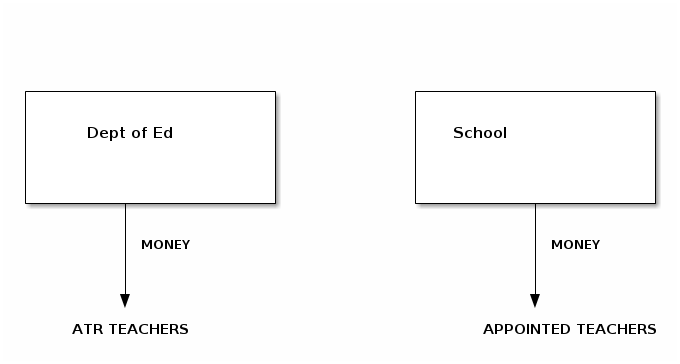 The DOE has money and schools have money. The schools pay for their teachers, supplies, and everything else but the ATRS are paid for by the DOE. Of course this isn't the case. The truth is that the DOE pays for everything: 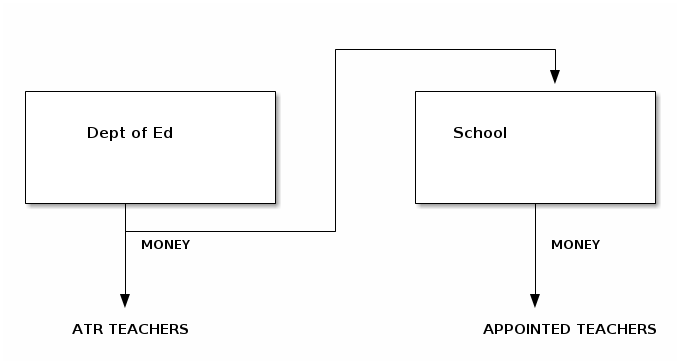 ALL the money comes from the DOE.

In the past the DOE has come up with poorly conceived and poorly received plans on how to deal with the ATR situation but it's really quite simple.

Start by recognizing that ALL the money comes from the DOE. Once you do that you can address the problem:

them and the DOE picks up the tab or rather adjusts the schools budget to compensate. The DOE will continue to do so until a real opening occurs at the school in the ATR's area at which point the ATR fills the position officially and the budget is readjusted.

however you create a 3 strikes (or maybe 2 or 4 or some number) rule.

them with a penalty or force an ATR placement when they have an opening (assuming the ATR is amenable).

That's it. Simple and solves the problem.