Most mornings, I start my day with a workout. Sometimes I run, sometimes I use my bike trainer. Dealing with plantar fasciitis since last June, it's mostly been the bike.

I occupy the time by either watching YouTube videos or catching up on Communications of the ACM or American Scientist. I'm about 6 months behind on both.

Inspired by some talk in one of the CS Ed Facebook groups, I thought I'd use the time to start going through some MOOCs. I started with Udacity's Intro to Information Security.

I'm only in lesson 4 but it's pretty light weight and generally well presented but I keep seeing the same thing that pisses me off about moocs. At the end of the day the video is just a lecture and what's worse, a lecture with no feedback loop.

Don't get me wrong, I love the fact that Udacity and the others have their material up online and that I can get to it free of charge but I don't love the fact there are people that still believe putting a computer in front of a kid is better than a teacher.

I think this quiz question is pretty representative of what I'm talking about. 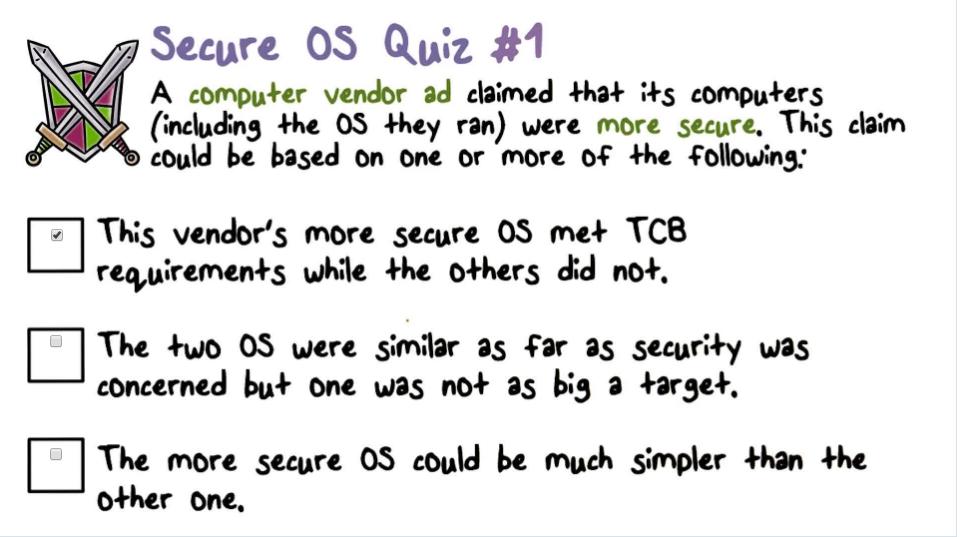 It's just a silly inline quiz question and not a particularly important one but it pisses me off.

To start with, it uses the word could not did. That means that every answer is correct. In fact an asnwer choice like "we're more secure because we have this really good engineer named Stanley" could be given and would be a correct answer since the vendor could base their claim on Stanley's awesomness, it would just be a bad idea. Unless you remember the specific ad campaign, you won't know the answer and even if you did, internally, they could use any justification they want.

It reminds me of when my brother was in grade school and he had a test question of:

Can you name all 50 states in the United States of America?

My brother's answer was "no." He was correct. I don't remember if the teacher agreed.

To be fair, I'm just watching the videos and it's possible that the readings clarified the question but even so, this is a very bad question.

Yes, it's just a silly quiz but it is indicative of the problem with any online learning resource and I and I'm sure others find it frustrating.

I don't want to come down hard on the lecturer or whomever made the quiz question. In a class I might ask a question poorly but I have an immediate feedback loop and can fix things right then and there. Frustration doesn't build and in the case of holes in important conceptual material deficiencies don't develop.

I also don't want to come down on free resources that I use and benefit from.

These types of issues seem small and the autodidacts that succeed in using MOOCS work around them but if you look at these materials critically as a teacher it's plain to see that their no substitute for the real thing.